The witches are back, well 2 of them are, and there's strange goings on at the opera house...people are disappearing, there's a strange low rumbling from the basement and that chandelier looks like an accident waiting to happen...
Its hard to review a Pratchett book without giving away the plot so I won't say anymore other than its a very funny book and no matter what happens, the show must go on... 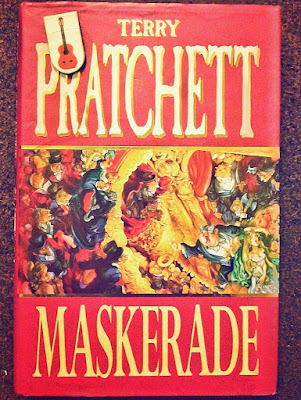 This is one of Pratchett's Witches book, the previous being Witches Abroad (1989).
In this book Magrat Garlick, the youngest of the 3, is to be married to King Verence and must learn how to Queen. Meanwhile the Lancre Morris Dancers are preparing for an entertainment for the wedding party and helped by much intake of alcohol (Scumble) they inadvertently awaken the Elves from within the stone circle. Elves are bad. But they have style and glamour which helps to win over the people of Lancre who don't really believe they're harmful. The witches know otherwise and along with Ridcully the slightly incompetent wizzard, who can't spell wizard properly, must set about convincing people about the true nature of said elves and doing something about them... 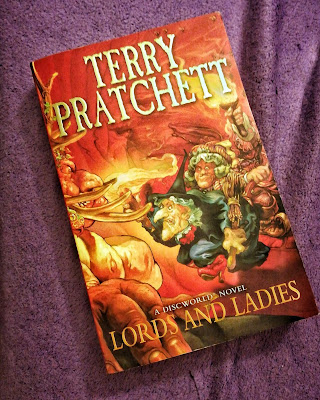 This is the first book featuring James Bond who, over the years has become an icon of all that's right and good, a sophisticated hero of our times etc. So I was kind of looking forward to reading about him. The book begins in the middle of the action, then jumps back a little to give some background on the case, and a little info on Bond himself. At first Bond comes across as cold, distant and unemotional. If he were a real person today he'd be branded a misogynist-his attitudes towards women were quite shocking. I mean we all know Bond is a womaniser, a ladies man, but in the book he comes across as disliking the fairer sex quite strongly. Near the beginning, when he is presented with a woman as a cover, (Vesper Lynd) he states that women are for recreation, that they have emotional baggage and need to be looked after. He clearly believes that a woman belongs in the kitchen, and in the bed, but not on a dangerous job. Anyway... let's say he thaws somewhat as the book progresses and begins to fall for miss Lynd, and this softens him up somewhat, and he is able to get on with the job in hand as it were....to say anymore would give too much away, but I'm sure by now most will be familiar with the plot featuring the french-named villain Le Chiffre and the counter-agency SMERSH (which goes on to feature in later books), and the dealings at the casino. The one aspect of the book that was slightly annoying was the copious use of french words and terms with no explanation. I kept my phone handy to act as translator! But on the whole not a bad book, if rather short at under 220 pages. But it was Fleming's first foray into fiction, and as regards the seemingly sexist attitudes, well this was written in the early 1950's, it was a different world back then. Some of the scenes are fairly violent- the torture scene that I remembered from the film is pretty much as it is in the book-it pulls no punches. Bond is no hero for boys-this is an adult world!
I will definitely read more Bond books. The sad thing is that Fleming died in 1964-two years after Dr No was filmed! So all those films that we have grown up with, well many of them were based on stuff not written by Fleming. And thats the thing. Bond lives on. People continue to want to see Bond rid the world of evil, in style, and so new stuff gets published. Even Sebastian Faulks, author of seminal war story Birdsong, has written at least one Bond book.
Long may he reign. And remain shaken, not stirred... 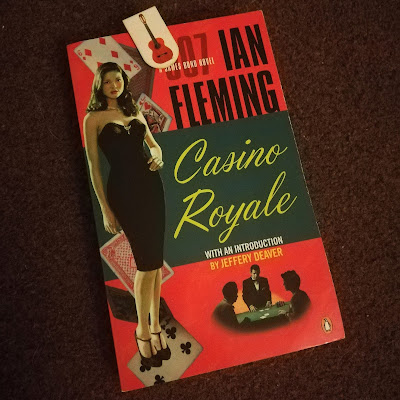 Hmm my last blog entry for 2017 and its an alleged classic. I've had this book on my shelf a while now and finally got round to reading it. The thing is that Dracula has become this HUGE legend, and one would expect the book from whence the legend sprang would be an amazing read. It wasn't. It had its moments and I could see how it would be seen as ground breaking at the time but, well, its all rather...dull! Not a lot happens, and Dracula himself hardly features in the whole book (which is written in the form of letters and diary entries) and is easily dealt with. Hardly terrifying. Oh well, on bookmooch it goes...off to read Dickens' A Christmas Carol, an annual favourite...
Merry Christmas everyone! 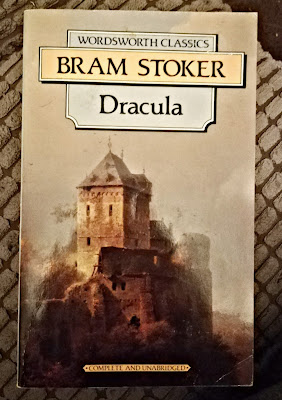 Yes another King book under my belt... I need to catch up you see, and I really do like a good horror story..this one doesn't dissapoint.
Now most people's memory of 'Salem's Lot will be flavoured by the 70s TV series featuring David Soul as Ben Mears. Well I don't remember the series that well but having read the book I don't think Soul did the protagonist justice, apart from the fact that Soul is a blonde and the 'real' Ben Mears is raven headed. Yes, raven-headed, a nod to Poe there...well it is a horror story after all... Anyway for those not familiar, the story concerns a vampire setting up shop in an old run down house in a town called Jerusalem's Lot in Maine. Now I've never been to America and I've yet to read Dracula (shocking I know...but watch this space) but after reading King's afterword about the genesis of the book I too believe that transplanting a modern day Dracula into a small dusty old town makes more sense than dropping him into a big bustling city-the Lot just works as that setting. An old monster watching over a few minions in a quiet town that has proper autumn weather-where you feel October as well as see it. And the smell of death and age mix in with the dust...a keeper. 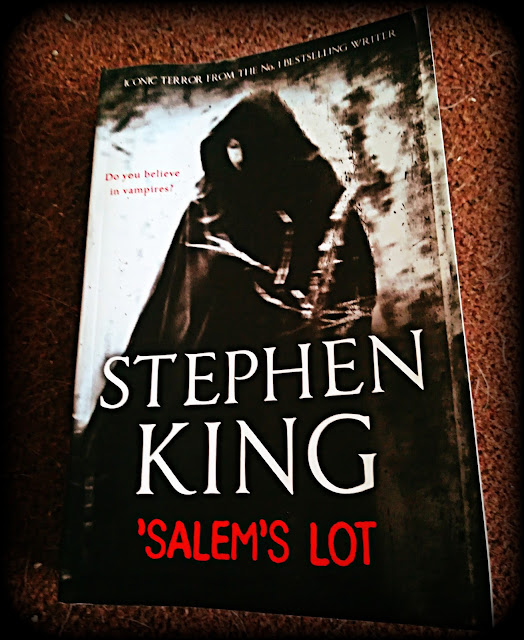 IT by Stephen King

First things first this is a big book, just over 1100 pages, and for years now this book has sat on the shelf taunting me, and I wanted to read it but it's size kept putting me off. I don't have a great deal of reading time so it just sat there, waiting. Recently I watched both versions of the movie (the new one is just fantastic, especially in the dark of the cinema!) and I finally answered the call...and I was surprised by how easy it flowed. The story is engaging, and the characters are (mostly) very likeable. I guess I could relate to it because I was picked on and bullied when I was a school kid. Only difference is I didn't have cool friends to hang out with...Anyway the book flowed on, with all its twists and turns, it's mini-stories incorporated into the whole, and I just couldn't put it down. In some ways it's similar to the movie Stand By Me, which is based a story by King, a bunch of friends hanging out, having a Big Adventure, and I got the impression that Stephen King had similar Big Adventures when he was a kid-you get the impression that he really understands what it's like to be a kid. When we grow up we forget so much of what it's like to be a kid, how different we are back then, and as much as IT is a horror story its also a story about friendship, about belonging and I did not want to stop reading it. Yes it's a big book but it's a big story, and definitely one worth exploring. Especially when it's cold and dark out, and you're under the covers...
Beep Beep... 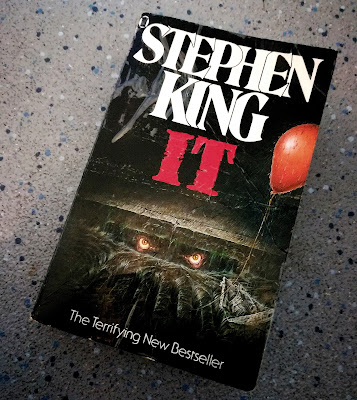 This is a collection containing 25 of this great horror writer's stories, though not all of them are horror. King has a good line in psychological thriller stories too, and there's plenty of that in here!
Two of the stories feature the world of Salem's Lot, in fact the book opens with Jerusalem's Lot, a story set in the 19th century, kind of a Salem's Lot begins, and is very good!
There's also The Lawnmower Man, a 1975 story that bears no relation to the 90s sci fi flick! It is pretty much Stephen King doing horror, quite creepy and more than a bit weird!
Overall a good collection with a nice long introduction by the author. 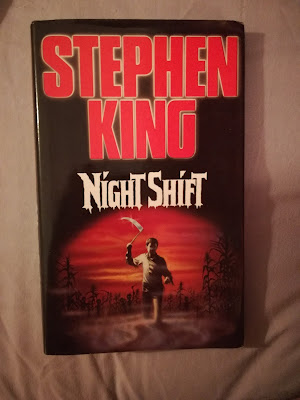 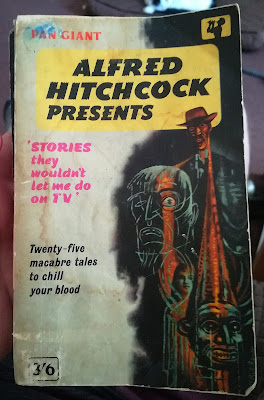 This is a collection of stories that, in Hitchcock's words 'they wouldn't let me do on TV.'
It's not a bad collection, one or two gems in there (Roald Dahl, William Hope Hodgson, M. R. James) but nothing out of the ordinary by today's standards. But then again this was published 50 years ago!

The stories are:
Being a Murderer Myself by Arthur Williams
Lukundoo by Edward Lucas White
A Woman Seldom Found by William Sansom
The Perfectionist by Margaret St Clair
The Price of the Head by John Russell
Love Comes to Miss Lucy Q. Patrick
Sredni Vashtar by Saki (H.H. Munro)
Love Lies Bleeding by Philip MacDonald
The Dancing Partner by Jerome K. Jerome
Casting the Runes by M.R. James
The Voice in the Night by William Hope Hodgson
How Love Came to Professor Guildea by Robert S. Hichens
The Moment of Decision by Stanley Ellin
A Jungle Graduate by James Francis Dwyer
Recipe for Murder by C.P. Donnel, Jr
Nunc Dimittis by Roald Dahl
The Most Dangerous Game by Richard Connell
The Lady on the Grey by John Collier
The Waxwork by A.M. Burrage
The Dumb Wife by Thomas Burke
Couching at the Door by D.K. Broster
The October Game by Ray Bradbury
Water's Edge by Robert Block
The Jokester by Robert Arthur
The Abyss by Leonid Andreyev
Posted by LarryS at 5.10.17 No comments: