Bring on the Deluge! 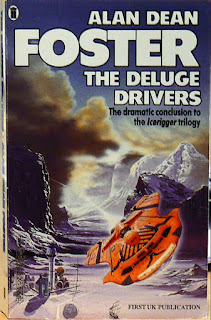 and so onto book three, which compared to the previous 2 books is nearly new- it says on the cover First UK edition and I was missing this final book for years-I managed to get this one  from Bookmooch.com!
This book begins by seeming a lot more SF than the previous two as it mentions other worlds in the Humanx Commonwealth including the planet Moth which features in one or more of his Pip and Flinx novels!

Well what a ride! This one is definitely more SF than the previous 2.

The Tran, the natives of the planet Tran ky-ky, are a race of cat/bearlike beings (they are referred to as being Felursine) living on a planet formed largely of ice, with virtually no metal so therefore seem rather medieval. They've never seen a space ship till Ethan Fortune and his crew crash land on the planet in the first book, so things move along very much how a fantasy series does-until this third book comes along! I wont reveal anymore so as not to spoil it but it was a great finish, with a nice surprise for Ethan!
Good one!
Posted by LarryS at 25.1.10

OK, I'm interested. Has he got any short story collections? I'll try any of them first. Then maybe a novel. You're right in what you said in a previous post, I do associate him with novelisations. A bit of SF prejudice maybe? Do we in the SF community think that's not proper SF?

Incidentally, bit of a coincidence: you mentioned Ian Watson in a comment and then I visited the Variety SF link vias your site where one of the downloads had a plot description that was spookily like the plot of an Ian Watson short story I read. (Amazing Stories Vol 1 No 1, story number 4)

Thats cool about the Ian Watson coincidence-have you read any Watson at all? The only piece of his I've read is the book The Martian Inca which wasnt bad!
As regards Alan Dean foster's stories, wel;l he has a few collections yea:
Theres the duo of two colections called 'With Friends like these...' and 'Who Needs Enemies', which I want to find!
http://www.fantasticfiction.co.uk/f/alan-dean-foster/with-friends-like-these.htm
and
http://www.fantasticfiction.co.uk/f/alan-dean-foster/who-needs-enemies.htm

Then there's other collections:
http://www.fantasticfiction.co.uk/f/alan-dean-foster/metrognome.htm

I've never actually come across any of these myself tho I remember reading an early story of his called Why Johnny Can't Speed (1971) in an anthology I once had.

Thanks I'll check them out. I'll maybe see what's on eBay or Amazon, and see if I can pick up some secondhand books cheap.

I've read a collection of stories by Watson, can't remember which because it was yonks ago from my local library. His style took a little adjusting to but I thought he was a decent enough writer. I do remember that story vividly though: mankind had developed some kind of technology that reached into the fourth dimension and it got the attention of some aliens who could rip apart three dimensions the way we rip paper.

You know that film A.I., that it was based oin a story by Brian Aldiss? Well I'm sure it was also partly based on a Watson story too..