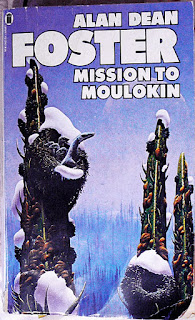 and book two is Mission to Moulokin, which I began last night. The original book was written in 1974 and this sequel was published 5 years later. Unlike the first volume there's a map which makes it look even more like a fantasy (was Foster thinking of 'Spellsinger' at the time?)
Another great adventure with Ethan From Fortune and friends. One thing about these books I've noticed is that the subject in the title, in this case the city of Moloukin, doesnt feature until we're well past the halfway mark, but even so the books are quickly paced and make for fun reading, especially if you dont mind fantasy-hard SF fans probably wont get as much out of the books as they might from say Alastair Reynolds or Stephen Baxter but theyre worth a read I think.
Posted by LarryS at 15.1.10